Snow on Your Trees and Shrubs 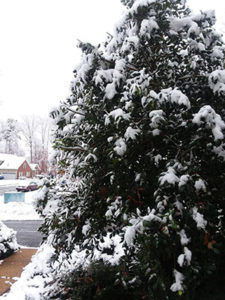 After a heavy snowfall, have you ever thought about removing heavy snow from the branches of your trees and shrubs? There are two thoughts about this question. We will discuss both of them here.

One thought is to leave the snow on the branches. This allows the snow to act as a natural insulator for the trees and shrubs. This can protect the frozen branches and roots from extreme temperatures. Even though the branches may be doubled over by heavy snow, it is thought that resiliency of most plants is amazing as they spring back once the snow has gone. The other thought is that the weight of heavy wet snow and/or ice can break the limbs of trees and shrubs. When you remove snow easily by hand or a broom, brushing upwards, does not usually cause damage. However, icy snow or partially melted snow that has refrozen can adhere tightly to branches. Knocking them off can cause damage. Shoveling, snow blowing, and snow plowing can cause snow to be more dense on plants. Try to avoid piling snow upon plants at all. Plants encased in snow may be protected from the extra weight. Do not pile snow mixed with salt into plants. This may cause burn to the plants.