What Is That Grayish Green or Sometimes Yellowish Stuff on the Bark of My Trees? 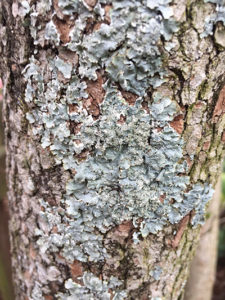 The stuff that is often found on the bark of trees is lichens. They are unique and harmless, but some consider them to be unsightly. So what are lichens and what is the treatment for them?

Lichens on trees are a symbiotic relationship between fungus and algae. The fungus grows on the tree bark and collects moisture, which the algae need. The algae then create food from the sunlight to feed the fungus.

Lichens on tree bark are harmless to the tree. Rhizines (similar to roots) allow them to attach to, but not deeply into the bark, thus not harming the tree. Many people think that lichens harm the tree when a tree becomes sick. This is impossible, and most likely the lichen was probably there long before the tree became sick.

While lichens are harmless to trees, some people still want to get rid of them. One way is to scrub the lichens with a soapy solution. Most should come off easily, but don’t scrub too hard, as this could damage the bark, which could lead to disease or pests. The best treatment is to change the environment where the lichens are growing. Lichens grow best in cool, partly sunny, moist locations. Thinning out tree branches overhead allows more sunlight and airflow to reach the bark. Also, make sure that irrigation water doesn’t routinely hit the lichens.

Lichens live with them or attempt to get rid of them. Sometimes it is better to leave them alone.