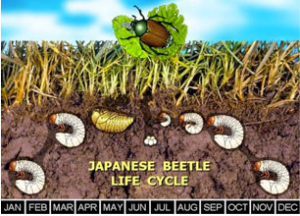 Japanese beetles are easily identified by their bright metallic green body and reddish-bronze wing covers, and can be found throughout most of Virginia. Japanese beetles have vivacious appetites and can wreak havoc on a lawn and ornamental plants if left untreated.

To understand how and when Japanese beetles may impact your lawn, consider their life cycle:

Adult Japanese beetles start emerging from the ground in late June and most are out by mid July. The beetles feed and the females start releasing a pheromone that attracts the males. Egg laying lasts from mid July to mid August. Immature grubs feed and develop until the soil starts to cool in the fall. At this point they burrow down about 4-8 inches and stop feeding. In the spring when the soil temperatures start to warm, the grubs move up and start feeding again. The grubs reach full size in late May or early June and pupate. Adult beetles emerge several weeks later and complete the cycle.

Japanese Beetles Kill From The Ground-Up

Long before you see any Japanese Beetles on your plants, immature grubs feed on plant and grass roots early in the spring just under the soil surface. When the roots systems are consumed by insects, those plants have little chance of survival when the summer heat and drought comes. To determine whether Japanese beetles have damaged your yard’s roots, look for brown patches in your yard and test whether patches of grass can be pulled up like carpet. These are both signs of root damage from grubs. Looks for signs of damage on the leaves of your ornamental plants. Japanese beetles feed on the soft flesh of leaves so you’ll see lots of small holes in the leaves around the veins of the leaf. If the Japanese beetle population is large enough, they can consume the majority of a plant’s foliage, which can be damaging to the health of the plant. Initially, the individual leaves will curl up and die, but severe cases could cause entire branches, or plants to die.

Whether Japanese beetles have caused damage to foliage or roots (or both!), plants with these types of injures are more susceptible to poor soil conditions or extreme weather.

Proper treatment for Japanese beetles can include insecticide to ease the bug population, but more importantly, a properly fertilized and aerated landscape can ensure plants have the right nutrients and conditions for vigorous root growth and luscious foliage to help recover from any injury caused by Japanese beetles or any other insects. For more information about treatment options in Richmond, Williamsburg, or Charlottesville, contact Virginia Green Lawn Care for a free estimate.