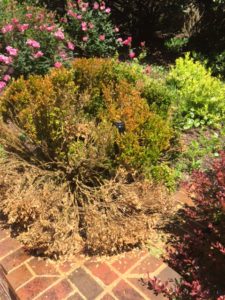 Root rot is a disease found in plants growing in wet soils.  As the name says, the roots rot.   It is usually a result of overwatering which can lead to fungus attacking the roots, lack of oxygen in the soil, or a combination of both.  Since the fungus spreads throughout the soil, often the easiest remedy is to remove and destroy the plants.

One of the causes of root rot is fungus.  There are several species of fungi that are the usual culprit.  These fungi thrive in wet soils and can transferred from one place to another when a plant with root rot is moved to another location. The other cause of root rot is lack of oxygen in the soil.  This usually happens when the soil is saturated with water.  Plants need nutrients, water, and oxygen in the soil to survive.  When the balance is out of wack, then the plant roots can rot.

Signs of root rot in landscape plants include wilting, stunting, and discolored leaves.  The foliage and shoots die back, and the entire plant soon dies.  If you pull up a plant with root rot, the roots will be brown and mushy, instead of white and firm.  Trees with root rot may develop cankers, which ooze reddish or black sap and sometimes develop dark vertical streaks. When identifying root rot, use a soil probe or dig a hole in the root zone of the suspected plant.  The soil maybe very wet, to the point that you can make a mud ball and/or the hole starts to fill with water.  Another thing is to look at the plant, plants with root rot can’t absorb moisture and nutrients from the soil properly.  The plants often resemble those suffering from drought and stress and nutrient deficiencies.

So instead of removing and destroying the plants, there are some corrective measures you can use to save a particularly valuable plant.  You need to keep the plant as dry as possible.  This means not to irrigate the plant unless the soil is almost completely dry.  To help dry out the soil, pull back the soil to allow moisture to evaporate from it.

The best remedy for root rot is prevention.  Fill in low places in the plant beds with organic matter so it drains more freely.  Take care not to overwater plants as well.

Even when all precautions are taken in the landscape, root rot may still occur.  However, if you pay close attention to the signs of root rot in the landscape plants, you’ll have a better chance of preserving your plants.