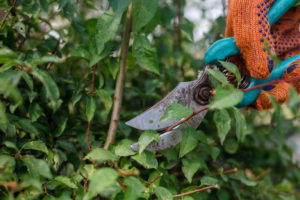 While you can generally prune dead, diseased, or damaged branches year round, it’s important to prune at timely intervals to create healthy blooms in Trees and Shrubs.   Pruning cuts should be made with a sharp pruning tool that’s appropriate for the job and should be limited to no more than roughly 25% of the tree canopy.

These types of trees and shrubs put out flowers called “old wood.”  They were created in the prior growing season and through dormancy , they eventually burst into a bloom the following spring when temperatures start to warm up.   An exception to this would be rejuvenating a plant, in which case, you’ll want to minimize the effects on the shrub’s health and cut it down to the ground in the late winter.  You may miss a growing season, but it will rebound after a year.

You can have more flexibility in pruning this group of trees and shrubs.  These later blooming plants can be pruned in late winter and early Spring. After they’ve finished flowering, they can benefit from a quick pruning job as well.

When do you prune Evergreens? Nov – Feb

The best time to prune your non-coniferous evergreens (such as boxwoods and hollies) are in the dormant season.

What should be pruned in the Summer?

The ideal time for pruning is typically late Winter to Early Spring for all Trees and Shrubs.  Nevertheless, some Trees and Shrubs will benefit from Summer pruning.  Cutting out suckers and waterspouts, especially on fruit trees, is beneficial.  Also, reducing the canopy of trees to increase air flow and circulation will cut down on fungus and disease formation.   This is the time of the year to also shape trees and improve their appearance if applicable.

To learn more about what and when to prune in your lawn contact contact Virginia Green at 804-285-6200.