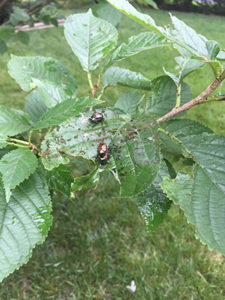 The Japanese beetle, Popillia japonica Newman, is a widespread and destructive pest of turf and ornamental plants in the United States. It is also a pest of some fruit trees, gardens, and has a total host range of more than 300 plant species. Adult Japanese beetles feed on foliage, flowers, and fruits. Leaves are typically skeletonized or left with only tough network of veins. The larvae, commonly known as white grubs, primarily feed on roots of grasses often destroying lawns. White grubs can be found in mulch beds and do not cause any significant damage.

First detected in the United States in a nursery near Riverton, New Jersey in 1916, they have spread to many other states east of the Mississippi River. Favorable climate, availability of wide variety of host plants, and lack of important natural enemies have influenced the spread of thee Japanese beetle. The adult is a broadly oval beetle and is a bright metallic green, with bronze or coppery-brown wing covers. Adults emerge from late June to early July. Mating begins soon after emergence as females release powerful pheromones that immediately attract a large number of males. In an attempt to mate, the attracted males form around the unmated female, forming clusters of beetles.

After mating, the female can lay up to 60 eggs over her life time. She burrows into the soil at a depth of 2-4 inches and prefers low moist soil conditions. These eggs hatch in 10-14 days and begin feeding of the roots of the lawn. White grubs can be found near the soil surface and have a distinct C-shaped appearance. They will continue to feed until the fall months and burrow down to overwinter. In the spring, as the soils warm, they will return to the surface and feed for another 4-6 weeks before pupating into the adult stage (Japanese beetle).

Both adults and larvae cause plant damage, but the host and nature of damage are usually different. Adults cause damage on foliage and flowers of a wide range of hosts and are most active on warm sunny days. The feeding on the upper leaf surface usually results in skeletonization. The grubs, which primarily feed on roots of grasses cause considerable damage to pasture, lawn and golf courses. Feeding damage on roots reduces the ability of grass to take up enough water to withstand stresses of hot and dry weather, and result in dead patches. Japanese beetle traps are useful in reducing small, recently established, or isolated populations. However, their correct placement is important, as lures and traps placed adjacent to host plants attract more beetles and result in heavier damage. Virginia Green does not recommend the use of these traps to control beetles since it is considered ineffective.