Where Do the insects Go for the Winter? 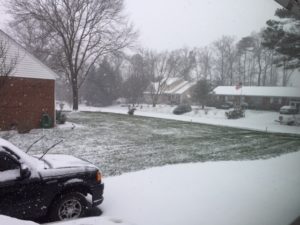 Insects have various ways to survive the winter.

Migration is one way insects escape the cold temperatures.  The Monarch butterfly is one insect that moves from cooler climates to warmer ones, but others migrate northward from southern states.  These insects are mostly crop pests.

Hibernation is a way adult insect survive the cold weather. Lady bird beetles, stink bugs and boxelder bugs are well known to hibernate, sometimes in high numbers.  They are often attracted to white houses and buildings, hanging out at window sills trying to get inside.  Many large wasps seek shelter in eaves and attics of houses and barns.  Others hide in cracks of trees, mulch and other shelters during the winter months.  Honey bees form clusters in the hive and vibrate the wings to generate heat to stay warm,  but they still need food and water inside the hive to survive.

Winterizing as immature larvae is another way some insects survive the cold weather.  Hiding in heavy leaf litter or mulch is a way some larvae protect themselves through the winter, such as the wooly bear caterpillar.  Others replace the water in their bodies with glycerol, an antifreeze-like substance.  Some larvae, like grubs just burrow deeper into the soil to escape the cold. Another way insects winterize is as eggs.  Not many insects lay eggs that can survive cold temperatures, but the praying mantis is one.  This is a beneficial insect that lays its eggs in a tan spongy mass near the ends of branches, especially on shrubs.

Winterizing as pupae is yet another way insects survive the winter.  Moths in the silkworm family survive this way.  We often refer to the pupae as cocoons.  You may find cocoons attached to stationary items in your garden or garage. So insects are able to survive winter, especially if the temperatures are stable.  Shelters benefit the insects, as well as snow which blankets the ground and keeps the temperatures surprisingly constant.  So the insects are still around in the winter, but not as active.  They will be back out in the spring and summer to either pollinate those flowers or destroy them.  That’s why Virginia Green Lawn Cares Tree and Shrub  Program is there to help you have healthy plants next year.